Broadening the Frame by Matt Carlson 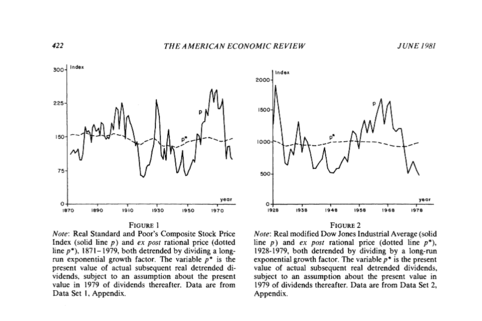 The Nobel Prize in economics this year is being awarded to three Americans, Eugene Fama and Lars Peter Hansen of the University of Chicago and Robert Shiller of Yale, for laying “the foundation for the current understanding of asset prices.” Although no one will contest the merit of these awards, the awards have been met with some surprise, particularly in view of the seemingly contradictory beliefs of two of the recipients, Eugene Fama and Robert Shiller.

Here is a brief synopsis of the insights and differences between the views of two of this year’s Nobel winners, Fama and Shiller.

The Random Walk Hypothesis and the Work of Eugene Fama

Although the notion that stock prices follow a “random walk” has been around since the beginning of the 20th century, in the 1960s and 1970s, this notion received a considerable theoretical and empirical boost from the work of Eugene Fama.

What is a “random walk”? Imagine a drunk late at night staggering around beneath a lamppost. As his steps are random, it is impossible to predict where he will step next. If you’re asked to predict what his position will be ten minutes from now, your best bet is that he will be back where he started, beneath the lamppost. You’ll probably be wrong, but you have a higher probability of being right making this prediction than you have making any other prediction. This is because there is no additional information you might possess that provides special insight into the drunk’s future movements.

Applied to financial markets, the random walk hypothesis says that stock price movements, like the steps of the drunkard, are random and thus unpredictable. If you’re asked to predict where a particular stock price will be at some point in the future, your best bet, if the stock price follows a random walk, is that it will be neither above nor below the underlying trend of the market. In other words, when the movement of an object—be it a drunk or a stock price—is random (determined strictly by chance), there is no special information one can possess that provides insight into future movements of the object.

Fama developed the implications of the random walk hypothesis for financial markets by formulating what is called the Efficient Markets Hypothesis, the assertion that financial markets are “informationally efficient,” i.e., that all publicly available information relevant to future movements of a stock price is already incorporated into the current stock price, so that investors can have no special insight into future price movements. A stock price is then exactly what it theoretically should be: the market’s best estimate of the discounted value of future dividends.

Why would markets be “informationally efficient”? Because smart, informed investors quickly take advantage of all publicly available information to profit from inefficiencies, thereby eliminating the inefficiencies, while less informed investors, because they’re randomly wrong, don’t pull prices in any particular direction. In other words, there’s only one way to be right but infinitely many ways to be wrong. And as long as investors aren’t systematically wrong, available information will tend to be correctly incorporated into stock prices.

The implication of the Efficient Markets Hypothesis is that one cannot consistently beat the market, i.e., achieve returns in excess of average market returns. As Burton Malkiel, author of the 1973 bestseller, “A Random Walk Down Wall Street,” observed, “a blindfolded monkey throwing darts at a newspaper’s financial pages could select a portfolio that would do just as well as one carefully selected by experts”—a prediction borne out by experiments, including the Wall Street Journal’s famous dartboard with blindfolded reporters acting as the monkeys.

The Work of Robert Shiller

However, this year’s Nobel Prize has an element of irony, even wit. For sharing the stage with Eugene Fama on December 10th at the Nobel Prize ceremony will be Yale economist Robert Shiller, perhaps the most effective critic of the Efficient Markets Hypothesis. To fully appreciate Shiller’s contribution and its relation to Fama’s, a bit of math is needed.

Let p* represent the “ex post rational” value of a stock index, i.e., the present value of subsequent dividends at some time in the future (it doesn’t matter when). And let p =E( p*) be the mathematical expectation of p*, conditional on all publicly available information—in other words, the real stock price index. Because the forecast term p is based on all available public information, it is considered to be the optimal forecast of p*, i.e., the best possible forecast, given the available information. Of course, forecasts, even optimal ones, are at least somewhat wrong, reflecting the fact that, although all publicly available information is utilized, there remains some unknown information (some private, some simply not known to anyone) that would be relevant to a forecast of p*. And to account for this error, we add to our equation an error term u equal to p* - p.  Thus,

Provided each investor is wrong in his or her own idiosyncratic way, the error term u and the forecast term p are uncorrelated. Now, as Shiller noted in a 1981 paper (pdf), the variance of the sum of two uncorrelated variables is the sum of their variances. Thus

As variances are always positive, it must be the case that var(p) ≤ var(p*). And converting variances to standard deviations by taking the square roots of the two terms, we can state the Efficient Markets Hypothesis as

(Note that equations used to generate the graphs are de-trended. This is why there is no long-term upward trend in the indices, as one would expect.) Not only is p* less variable than p; it is not close. Indeed, Shiller finds that “The left-hand side of the inequality [σ(p) > σ(p*)] is always at least five times as great as the right-hand side [as in Standard and Poor’s diagram, above left], and as much as thirteen times as great [as in the modified Dow Industrial Average diagram, above right]”!

The key implication of Shiller’s work is that long periods during which asset prices come unmoored from “fundamentals” are not only possible but common. Such bouts of irrationality have their most pernicious manifestations in asset bubbles—periods when investors buy assets based not on fundamentals, such as the expected profitability of a company or the income needed to pay for a house, but simply because they expect the price of the asset to keep rising. Indeed, Shiller is famous for calling two recent asset bubbles, the tech bubble in his 2000 best-seller Irrational Exuberance and the housing bubble in both a 2003 paper (pdf) (co-authored with Karl Case) and the second edition (2005) of Irrational Exuberance.​