Broadening the Frame by Matt Carlson

Next: A Just World?

Political scientists Matt Grossman and David A. Hopkins observe that liberals and conservatives have very different governing styles, reflecting their differing constituencies. Liberals, they observe, “primarily value concrete and comprehensive government action, even if it requires substantial compromise in order to be realized.” Conservatives, by contrast, “often prize symbolic measures or the obstruction of government activity” (p. 2). While conservative politics in the U.S. “is dominated by a self-identified conservative movement whose members are united by a devotion to the principles of small government and cultural traditionalism” and who “tend to evaluate public policies on the basis of ideological congeniality rather than legislative outcomes,” the left “is less an ideologically unified movement than a looser coalition of social groups whose interests are served by government activity of one form or another.” Grossman and Hopkins schematically illustrate the ties between interest groups that compose the Democratic and Republican coalitions. The Democratic network is large and densely interconnected, representing numerous policy positions, economic interests, and social identities. It also exhibits strong ties between electoral and legislative networks (“dense ties across the issue spectrum for both candidate and legislative endorsements”), which enables it to unify around a broad set of policy positions. The Republican coalition is smaller, “with few central players, mainly businesses” (p. 10, red and blue). Riven by tension between the doctrinal purity demanded by a large portion of its base and the compromises necessary to govern, it is less disposed toward governing than are Democrats.

Because the groups that compose the Democratic coalition engage in politics primarily to achieve concrete goals, “left-leaning officeholders, activists, and voters are more likely than conservatives to take a close interest in the substantive details of the legislative process and are more willing than their counterparts on the right to compromise in order to win partial achievement of their policy goals if the alternative is simply inaction” (pp. 1-2). Grossman and Hopkins cite data from the Pew Research Center to show the differing attitudes of these different constituencies toward compromise:

The difference is especially clear with high-profile legislation, with Democratic lawmakers much more willing than Republican lawmakers to support the policy initiatives of presidents of the opposing party. President George W. Bush’s No Child Left Behind law, for example, passed with overwhelming bipartisan support (91-8 in the Senate and 381-41 in the House), while his Medicare Part D expansion had at least some Democratic support (16 of 203 Democrats in the House; 11 of 48 Democrats in the Senate). Bush’s stimulus bill (the Economic Stimulus Act of 2008) passed by 81-16 in the Senate (48 Democrats and 33 Republicans voting yes) and 380-34 in the House (215 Democrats and 165 Republicans voting yes). Even Bush’s Iraq War Resolution had strong bipartisan support, with most Democrats in the Senate (29 out of 50) voting yes, albeit Democratic supporters in the House were a minority (82 out of 208). By contrast, President Obama’s stimulus bill (the American Recovery and Reinvestment Act of 2009) garnered just three Republican votes in the Senate and zero in the House. Obama’s Affordable Care Act (a policy developed at the Heritage Foundation, that served as the Republicans’ counter-proposal to President Bill Clinton’s health care reform proposal, that was championed for two decades by prominent Republican politicians, and that was enacted into law in Massachusetts by the party’s standard bearer in the 2012 presidential election) won no support from Republicans in either house. And the Dodd-Frank Wall Street Reform and Consumer Protection Act was supported by just three Republicans in the Senate and three Republicans in the House.

The American public, Grossman and Hopkins contend, have two distinct political personae: “operational liberalism,” in that Americans generally support the policy proposals championed by Democrats, and “symbolic conservatism,” in that they have an abstract philosophical preference for “small government.” Thus, both parties have a basis for appeal to the American public. We observe the divided character of the American electorate in the Congressional elections of 2014, in which voters overwhelmingly chose Republican over Democratic candidates even as they sided with Democrats on every major policy issue. The following graph was put together by Zachary Goldfarb of the Washington Post (http://www.washingtonpost.com/blogs/wonkblog/wp/2014/11/04/americans-will-to-vote-for-republicans-even-though-they-disagree-with-them-on-everything/):

And on ballot initiatives, voters throughout the country supported positions more strongly associated with Democrats than with Republicans: in Seattle, citizens voted to raise their property taxes to subsidize preschool education; in Alaska, Oregon, Washington, D.C., and Florida, voters passed marijuana legalization initiatives (recreational marijuana in the first three; medical marijuana in Florida); and in Colorado and North Dakota, voters rejected fetal “personhood” (anti-abortion) amendments (63 percent to 37 percent in Colorado; 64 percent to 36 percent in North Dakota). Yet the election was a landslide for the party that opposes the policy positions Americans by and large hold. Evidently, even as Americans take Democratic positions on most issues, Republicans have managed to appeal to the electorate at a more visceral level.

The asymmetry of the American right and left identified by Grossman and Hopkins gives rise to the characteristic pattern of American politics. One party—the Democrats—proposes the lion’s share of legislation that benefits sizable segments of the American public. The other party—the Republicans—has the task of tarnishing these proposals, which it does efficiently, in broad strokes, through across-the-board condemnation and demonization of the identifiable individuals (above all, the president) associated with them. The “conservative advantage” may arise partly from the fact that it is easier to tarnish policy proposals than to fashion them.

As Grossman and Hopkins observe:

Several of the most ambitious legislative achievements of the Pelosi-led Congress, including the 2009 economic stimulus package, the Dodd-Frank financial reform bill, and (especially) the Affordable Care Act, ultimately proved controversial, if not downright unpopular, due to Republican figures’ effective characterizations of them as ‘irresponsible spending’, ‘government takeovers’, ‘job killers’ and even ‘socialism’. Opponents tended to criticize these measures using these and other broad terms, sounding themes designed to resonate with a symbolically conservative mass public, even as proponents have attempted, often unsuccessfully, to publicize the specific attributes of the legislation that might find favor with operationally liberal voters. Unsurprisingly, surveys have consistently found that while the ACA itself is not especially popular with Americans, nearly all of its individual provisions win majority approval—some by overwhelming margins—reflecting the symbolic-vs.-operational divide that reliably characterizes American public opinion (pp. 18-9).

The work of Grossman and Hopkins documents a core feature of American conservatism: unwillingness to compromise. Why would roughly half the Americans public be receptive to this stance? First, unwillingness to compromise is an appealing trait to people in general, not just conservatives. It may be important in social life to signal one’s willingness to stick to one’s principles, as it may foster a degree of respect that benefits the individual. (It poses a problem, however, for self-governance of a large society in which the interests of many disparate groups must be reconciled.) Nevertheless, as with any trait, people vary in the degree to which they manifest it. Conservatives evidently manifest the trait more strongly than others. Thus, conservative politics, not surprisingly, is largely about taking stands, not achieving policy goals.

Unwillingness to compromise resonates with the moral foundations that Haidt associates with conservatism—loyalty, respect for authority, and valorization of the sacred—for these traits are largely about signaling commitment, i.e., indicating that one is motivated not by self-interest but by communal values. Behavior motivated by such values is not case-by-case but categorical. To exhibit these values is to advertise the kind of person one is, to signal one’s membership in a community. By contrast, the more “liberal” moral foundations, care and fairness, more strongly concern particular outcomes, the results of policies. Because care and fairness concern desired states of affaires, individuals animated by these moral foundations should be more willing to do what is necessary, including compromise, to achieve desired ends than individuals motivated by moral foundations geared more toward establishing solidarity with a given community.

We thus have a portrait of the conservative character: unwilling to compromise and committed to moral values that identify the individual as a member of a community. But what about the specific content of conservative political positions? Why is abortion wrong? Why are gun rights sacrosanct? Why is capital punishment so appealing? Why must markets be free? Why is the “size” of government so important? Why is redistribution so anathema?

We turn to this question next. 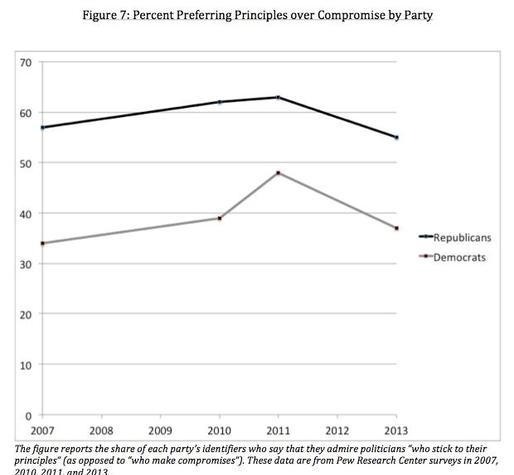